Are you tired of being a couch potato who has no energy to do anything at all?

I have been there and I do have days when getting up from the couch even to fetch the bottle of water lying across the room seems a difficult task.

You even watch boring advertisements on TV because the remote is far away.

It’s okay to unwind at the end of the day after long hours of work in front of the TV or watching Netflix. But when you have an intimate love story with your couch and can’t leave it for whatever reason, it’s another story.

Why is it bad to be a couch potato?

At times you deserve some couch potato time in your hectic lifestyle. But if you reach a point where you can’t wake up to do the necessary things around the house, it can affect you badly.

Human beings are made to move and sitting all day and leading a sedentary lifestyle has harmful effects on your health.

Even if you exercise for one hour a day and then spend most of your hours at the work desk and then later in front of the TV, you are leading a mostly inactive life.

A study from the American Cancer Society finds a link between long periods of leisure time sitting and a higher risk of death from all causes.

Prolonged leisure-time sitting (which is greater than 6 hours per day) was associated with a higher risk of mortality from all causes like cardiovascular disease, cancer, diabetes, kidney disease, suicide, chronic obstructive pulmonary disease, pneumonitis due to solids and liquids, liver, peptic ulcer and other digestive diseases, Parkinson disease, Alzheimer disease, nervous disorders, and musculoskeletal disorders.

There are so many other side effects of being a couch potato Like:

Couch potatoes are at higher risk of becoming obese simply because sitting doesn’t burn many calories.

Tel Aviv University researchers found out that preadipocyte cells – the precursors to fat cells – turn into fat cells faster and produce even more fat when subject to prolonged periods of “mechanical stretching loads” – the kind of weight we put on our body tissues when we sit or lie down.

Physical activity has been proven to improve immunity. The more our body moves, the more our blood circulation improves, which helps in improved immunity as the blood reaches more parts of the body more efficiently.

Sitting for a prolonged period has also been shown to reduce blood circulation which leads to numbness in your limbs and cramps.

Too much sitting has also been proven to cause reduced thickness of a brain region integral to the formation of new memories. This could lead to cognitive decline.

Our brain needs an adequate amount of oxygen and nutrient supply to maintain itself. Being a couch potato doesn’t help in improving these supplies and thus affects its functioning.

If you are a couch potato, you might experience problems related to poor postures, such as back or neck pain. Prolonged sitting causes increased stress on the neck and back muscles. It also puts a strain on your discs.

There can be many more side effects of prolonged sitting. So what should couch potatoes do to protect their health?

Here are some easy ways to stop being a couch potato and become fit.

A person is being lazy if he is able to carry out some activity that he ought to carry out, but is disinclined to do so because of the effort involved.

If you feel tired to do anything, the reason may not always be laziness. It could be due to other health concerns too. So get your bloodwork done and consult a physician before concluding “I am just a lazy person”.

If you are used to procrastinating and being lazy, it can feel hard to change the habits starting from the next day.

One thing you can do is to start breaking the label of “I am a lazy person”.

We are not born with laziness and neither we are born to be couch potatoes. These are habits we acquired on the way.

In the same way you formed these habits, you can break them too.

Set goals for yourself and break them into monthly, weekly, and daily tasks. Visualize your life when your goals are achieved and inspire yourself through good personal development books, videos, etc. on a daily basis.

Life is too short to be wasted by doing things that don’t matter. Make each day matter.

From my experience, I know it’s hard to break the laziness habit. As I said, I was also once a lazy person who had an inseparable relationship with her couch.

But thankfully I was able to break free from the habit slowly and now I can’t stand wasting my days without doing anything.

Even if I am not doing anything related to work, I try to do something for my self-care, either rest and relax or something to improve my skills. 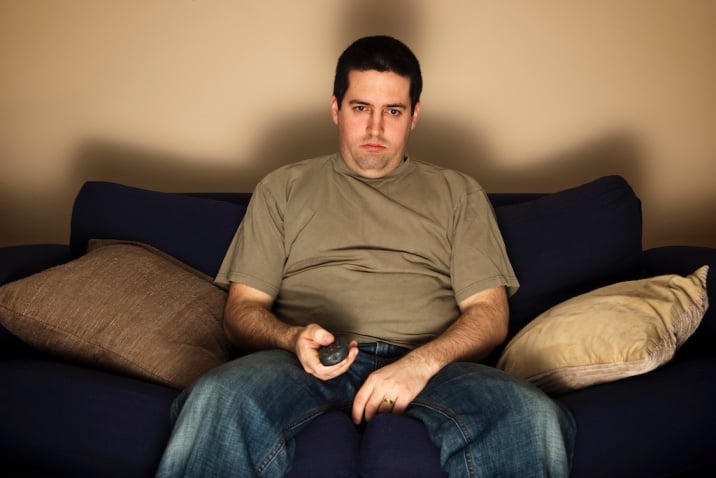 2. Find excuses to get up from your couch

As studies point out, even if you exercise daily, sitting for long hours for the rest of the day is still harmful.

The human body is designed to move. Physical inactivity deteriorates your health by weakening your muscles and bones.

Therefore, try to get up from the couch as much as you can. Even it is to get that bottle of water or get that remote.

Here are some ways to incorporate light physical activities in order to break the sitting habit.

Example: Folding the laundry by standing up, cleaning the floor, or dusting the furniture

3. REDUCE THE NUMBER OF HOURS YOU SPEND IN FRONT OF A SCREEN

The binge-watching habit makes breaking couch potato habit more difficult. After a long day, when we are tired and don’t have much self-control left, it can be tempting to just push that button and relax.

On the hard days, you must do so. When you have nothing to do, it’s okay to play a sitcom and relax.

But the problem arises when you binge-watch to procrastinate on other tasks or to fill a void and avoid reality.

It really affects your productivity and you feel bad later on. What you can do is set a number of hours in a day for watching shows.

Or you can set the days of the week on which you watch shows.

When you don’t have a screen device tying you to one place, out of boredom, you will feel diverted to do other productive activities.

You can also enable website blockers on your computer to lock the “problematic” websites after a set amount of time.

I have also set an app called Lock Me Out on my phone to lock apps like Netflix and Youtube automatically, after bedtime. So, even if I get tempted to binge-watch, it’s not possible. 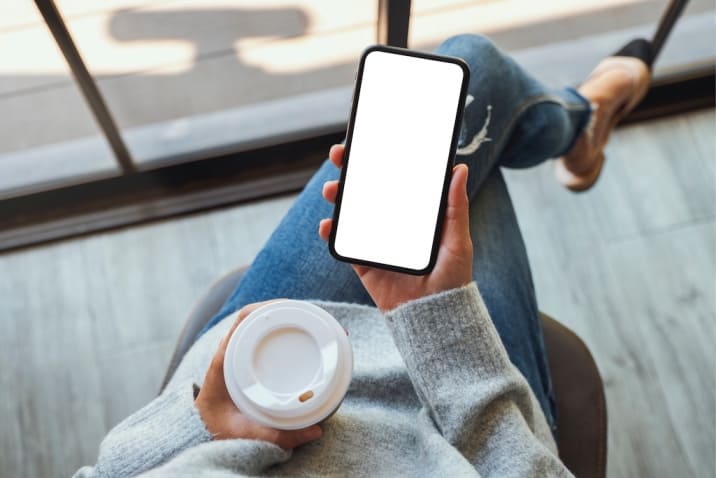 4. USE A STANDING DESK

There are different types of standing desks available in the market today – including the treadmill desk which helps you to walk while working.

If your work requires a lot of sitting, it will be worth it to invest in a standing desk.

According to experts, the best way to use a standing desk is to alternate between sitting and standing. You don’t have to stand all day, as that’s also not good for your legs.

5. USE STAIRS WHENEVER POSSIBLE

The way to break bad habits is to replace them with better ones. So, to stop being a couch potato, you have to learn to love moving your body more.

Using the stairs also helps you to burn calories and get into shape. 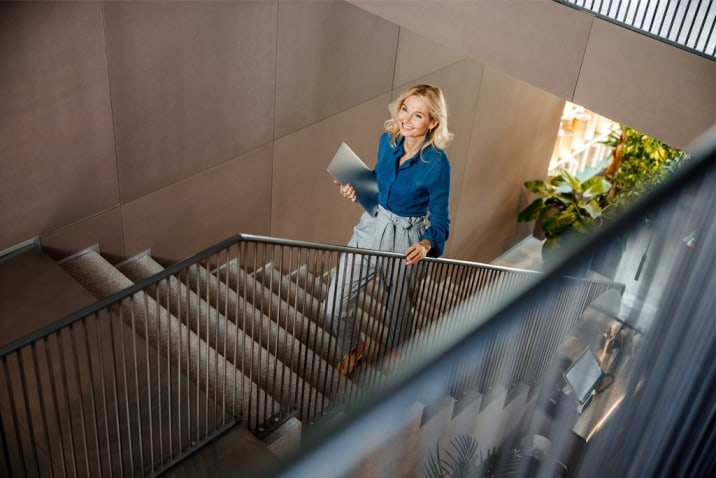 Using public transport has many benefits- not only for the economy and environment but for your health too.

When you use public transports, you get more opportunities to walk – to the stops and to your destination.

When you do more physical activity, you feel energized, and when you are energized, it is less tempting to crash on the couch.

Doing the chores around the house is a great way to stop being a couch potato.

House chores never end, so you have plenty of opportunities to move your body on a daily basis and put an end to your laziness and couch potato habits.

Make a list of cleaning chores to do around the house on a daily basis. If you feel too lazy, start with small tasks, and move onto bigger ones.

And here is an interesting article on how many calories you burn doing the common household chores. 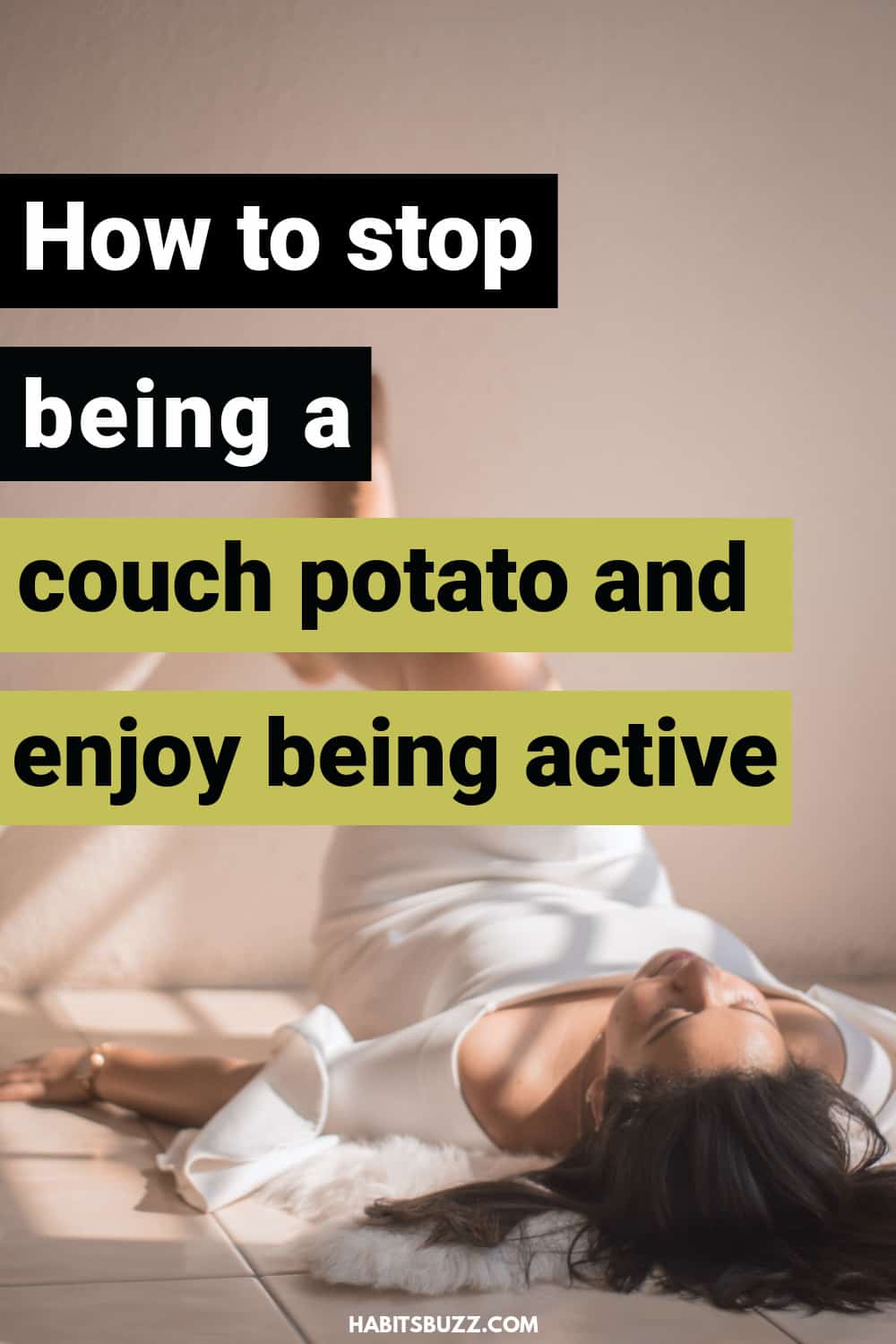 Previous Post: « 20 powerful mantras to help you get through bad days
Next Post: How to start loving yourself more (10 effective tips to start self-love journey) »

This site uses Akismet to reduce spam. Learn how your comment data is processed.